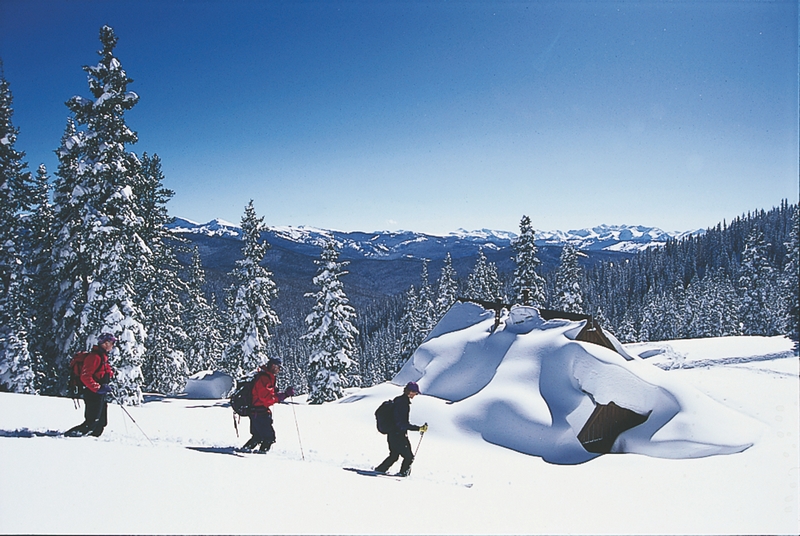 In 2014 a Colorado state statute established the sale of custom license plates honoring the 10th Mountain Division. This further solidified the partnership. Led by then Foundation Chairman Tom Hames, a portion of the revenue is earmarked for the Hut Association. The Association uses the funds to advance their Backcountry Exploration Program.

The program encourages the use of huts by educational nonprofits, promotes a better understanding and appreciation of the natural mountain environment and develops individual self-reliance among hut users. They assist nonprofits financially, and offer guidance in trip planning. Who can participate? Nonprofits with an educational emphasis such as schools, youth organizations, churches and senior citizen groups have received up to 50% off whole hut rentals during the week.

The first 10th Mountain Division Huts built were the McNamara and Margy’s, completed during the summer of 1982.

To learn more about the 10th Mountain Division Hut Association and the huts, visit www.huts.org.

A member of the 10th Mountain Division from 1996 to 2003, Steve served as the B Battery Commander of 3/62 ADA and the Division’s Contracting Officer and deployed with the Division to Afghanistan as a member of Operation Enduring Freedom in 2001. During his time at the Division, Steve established a real attachment with the soldiers and the community of the Thousand Islands. Coupled with his passion for Rieslings from his time in Germany, in 1999 the idea to start a winery in the Thousand Islands took hold and Steve began conducting market research.

Their common goal with the Military Dress wines was to establish a financially rewarding program that would perpetually donate a percentage of its proceeds back to the 10th Mountain Division Association’s programs and soldiers. Hand-crafted wines were developed to reflect the robust history of the U.S. Military and especially that of the Army’s 10th Mountain Division. These Military Dress wines are noble wines that embody the honorable character of military service.

The success of this collaboration has resulted in Thousand Islands Winery proudly donating back over $35,650 to the 10th Mountain Division Association since its inception.  Conaway says, “Giving back to the community has always been important to me.  It is great that this 10th Mountain Division Association program is still going strong, despite the passing of its founder Nate Morell.”

Thanks to the partnership with the 10th Mountain Division Association, Thousand Islands Winery wines have made their way down south to Fort Polk, Louisiana, where they can be found in the Class Six store. Recently, the winery has further expanded its retail wine sales into Kentucky, South Carolina, Virginia, Washington, D.C., Maryland, and Georgia. This expanded distribution is helping the Military Dress program to really gain momentum.

The Conaways invite the public to visit their winery located in Alexandria Bay, New York, purchase their wines and sip a bit of history in the making.  Cheers! 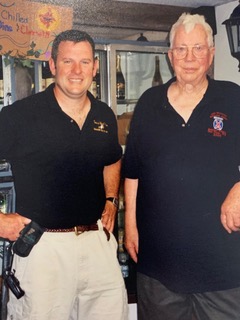 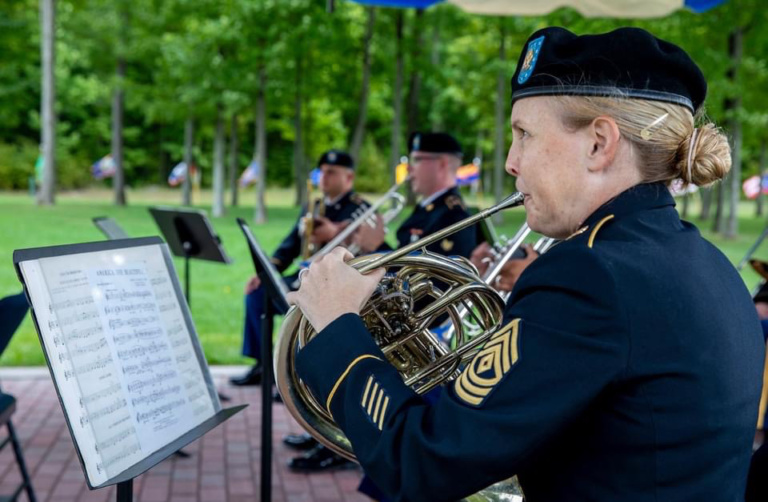 I grew up hearing my Grandpa’s war stories and meeting his friends from the 10th Mountain Division. As an officer in the Navy, he served in all theaters during WWII, and supported 10th Mountain Division Operations. We also believe he was at Kiska and he later served in the Korean War. After the war he was named an honorary member of the 10th.

My Grandpa, Alexander Gale “Buzz” Bainbridge, instilled the value of hard work in all of us. I came into the Army in 2005 at 28. At that point I had already performed and taught music all over the world. I completed a Bachelor’s in Music at Indiana University and Master’s Degree in Music from Mannes College of Music in New York City and served as an assistant instructor of French Horn at the University of Colorado at Boulder while working on my Doctorate. After I completed my schooling I worked as a professional freelance musician in New York City and performed in many shows, did some commercial recording work for American Broadcasting Company (ABC) and performed with many overseas orchestras, but a career in military bands was always in the back of my mind.

Grandpa was an amazing team builder which enabled his success both in the military and as one of the pioneers, along with many 10th veterans, in carving a thriving ski industry in the Rockies.

Together, Grandpa and his 10th Mountain buddies founded 50 ski resorts in Colorado, New Mexico, Arizona, and Wyoming. Grandpa was marketing director for all of Aspen and ran Buttermilk, while my dad had a summer job of cutting trails for what is now Snowmass. They managed Santa Fe Ski Basin, Sandia Peak, Red River, and Hyde Park in New Mexico; Jackson Hole, WY; Alpental near Seattle, WA; and Arizona Snow Bowl. He was also a member of the National Ski Patrol and both he and my grandma taught skiing at many of the resorts. As kids, we were all expected to learn how to ski before we learned to walk and today I am an avid Nordic and Alpine Skier with the goal of becoming a certified ski instructor and receiving my ski patrol certification in the next couple of years so that I can carry on the family tradition.

My Grandpa also told me stories of his uncle, our only other relative with musical talent. A saxophonist in the Navy Band, he was killed by a Kamikaze aboard the USS Saratoga a few days before Iwo Jima. Grandpa was extremely patriotic, always leading by example andencouraging us to be part of something bigger than ourselves.

A significant event that drove my decision to audition for the Army Band was witnessing first-hand the events of 9/11. I was working on my master’s degree in NYC and lived about a mile from the World Trade Center. The privilege to honor those lost by playing at many memorial ceremonies had a profound impact on me.

Before joining the Army, I had the opportunity to perform at the summer Aspen Music Festival, a short drive from Camp Hale. One of those summers my grandparents came up to see me and we took a side trip to Camp Hale so that I could meet some of my grandpa’s 10th Mountain Division buddies. Ever since that day I have been interested in 10 Mountain Division history and the following summer I decided to audition for Army Bands.

I knew that in performing with the Army Band I would have the opportunity to do something meaningful with my music and also be able to provide free concerts to underserved populations. My Grandpa was my biggest supporter in my decision.

Unfortunately, my Grandpa passed in 2015 but I have many extended family in Colorado who continue to sport their 10th Mountain apparel. I feel like this assignment was meant to be.

So far some of my highlights have been performing at the Annual Remembrance Ceremony at the Military Mountaineer Memorialon post and leading a 9.11 mile Ruck march starting at that memorial in homage to those who lost their lives on 9/11.

We are also working on several projects at the band to further honor the legacy of the 10th to include re-arranging and recording some of the old cadences, songs, and marches. Due to COVID-19 most of our performances have beenvirtuallately but once the restrictions are lifted my goal is to find additional ways the band can honor the 10th’s legacy. Additionally, the 20th anniversary of 9/11 is coming up in 2021 and I also hope to find a way for the band to honor those who lost their lives during the attacks.

I am excited to see what the 10th Mountain Division Band can accomplish, and I hope to use some the lessons my grandfather taught me to further build and lead this amazing team. 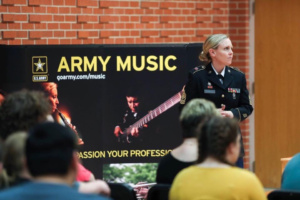 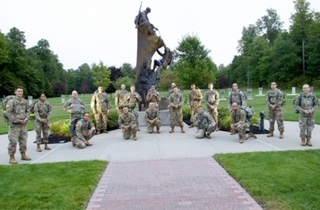 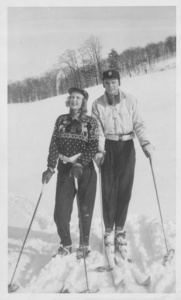 END_OF_DOCUMENT_TOKEN_TO_BE_REPLACED

Support the Foundation With Your Colorado State Tax Refund

Any cookies that may not be particularly necessary for the website to function and is used specifically to collect user personal data via analytics, ads, other embedded contents are termed as non-necessary cookies. It is mandatory to procure user consent prior to running these cookies on your website.