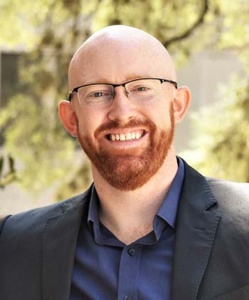 Jonathan Carroll is the winner of the Foundation’s 2020 Charles A. and Loyola M. Murphy Family Endowed Scholarship. Apply for the Military History Scholarship by April 15.
By Amy Scanlin

Though the majority of U.S. Army forces during the U.S. efforts in Somalia were drawn from the 10th Mountain Division, their participation in Operation Restore Hope and Operation Continue Hope between December 1992 and March 1994 is often overshadowed by the events immortalized in the movie Black Hawk Down. Jonathan Carroll, a Ph.D. Candidate studying Military History at Texas A&M University, and 2020 winner of the Murphy Family Endowed Scholarship through the 10th Mountain Foundation, aims to change that through his dissertation project “God’s Work in Hell: Intervening in Somalia, 1992-1995” scheduled for publication in 2024.

It has been a busy time since Carroll came to the U.S. from Ireland in 2018 to further his studies at Texas A&M. “This scholarship has been invaluable,” says Carroll of the research he has been able to continue despite pandemic shutdowns, “When COVID hit, all the archives shut down so I couldn’t travel to conduct any of the research I had planned. These funds enabled me to purchase research materials such as scanned documents, copies of reports, meeting minutes and veterans accounts. This support contributed directly to the publication of an article “Courage Under Fire: Reevaluating Black Hawk Down (Sage Publications, accessed at  https://journals.sagepub.com/doi/abs/10.1177/09683445211042909?journalCode=wiha).  “It really saved me. The scholarship came just at the right time.”

So, how did a man from Ireland become interested in Somalia anyway, much less find his way to the U.S. to study? Carroll credits his grandfather with sparking his love of history as together they’d go to the library when he was young. One day he checked out A Bridge Too Far, which took far longer to read than the one-week circulation period. “I renewed and renewed and renewed and it lit a fire of interest in military history.” He was first introduced to Somalia while watching Black Hawk Down with his father, but it wasn’t until years later after Carroll joined the Irish Army that he learned Irish soldiers participated in those operations as well.

“I was shocked,” Carroll says, “Why had I not heard of this before? And, then I wondered why were they there and what was Somalia all about? It was the most ambitious nation building operation in history. European nations that hadn’t deployed since WWII were there. Indian and Pakistani Armies were working together. I was asking these questions and no one could give me the answers. So, I decided to write a book.”

His first research trip as part of this project was to the US Army Heritage and Education Center in Carlisle, PA. “They had a great collection of 20 boxes labeled “Somalia Crisis.” I photographed everything, thousands of documents, and let those documents build the story instead of any preconceptions. It changed my entire perspective.” From there, his project snowballed into something much larger than he could have ever imagined.

“The 10th Mountain Division and Fort Drum Museum at Fort Drum, NY sent hundreds of photos, documents, interview transcripts, unpublished memoirs… It was like detective work. At the start of any research project you just don’t know what you don’t know. But as I learned, I was able to break it down into constituent events – strategic, operational, tactical. I could identify the principal actors.” It was through the museum director, Sepp Scanlin, that Carroll was reminded of the 10th Mountain Division Foundation and their scholarship programs.

“I had seen an old flier in a meeting room at Texas A&M. I thought ‘I study the 10th Mountain Division. I wonder if they still do this?” Carroll contacted the Foundation with a question. His focus was the modern 10th but the scholarship was intended for WWII era study. Would the Murphy family be willing to consider supporting his research?” The Foundation contacted the family and they were open to it, so Carroll submitted an application.

Since the publication of “Courage Under Fire,” Carroll has received a number of requests for lectures including at the Naval Post Graduate School in Monterrey where his paper has become required reading. He lectures on Somalia at conferences and was a guest on the XVIII Airborne Corps podcast commemorating the 28th anniversary of the battle that is forever tied to Black Hawk Down, (https://podcasts.apple.com/dk/podcast/episode-75-the-battle-of-mogadishu-part-one-of-two/id1547996961?i=1000537370246)  “Everything I am doing, I couldn’t be doing without the support of the 10th Mountain Division Foundation.”

As the world slowly reopens, Carroll is already planning to use the remainder of his scholarship funds to visit the UN Archives. “This way I can see what the other sides say. And between the U.S. and UN perspectives, we find something that approaches what actually happened.”

The US Army’s story is scattered across institutions and that story is linked across the decades and national borders. As part of Carroll’s research one day he was combing through documents on Canadian troops who served in Somalia and came across a familiar surname. His grandfather’s sister had married a Canadian and moved from Ireland long before he was born. Carroll was curious, and he found the person on LinkedIn. “I explained who I was and what I was working on. I asked if he was the same Major Appolloni that served in Somalia, and as an aside asked are you my first cousin?” It turns out, he was both.

As a former member of the Irish Army, Carroll has found his military experience to be invaluable in helping him to understand the lens of Somalia and the role the 10th Mountain Division played first throughout the US and then UN intervention. “Ireland doesn’t have the “Thank you for your service,” mentality the U.S. has, and I’ve not served in a combat environment. But, understanding hierarchy, rank structure, how military relationships and bureaucracy works has enabled me to have a much greater understanding than someone without the benefit of military experience. The Irish Army is small, only about 9,000 people, and I am proud to have served my country.” 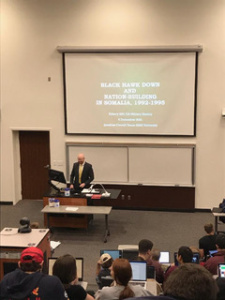