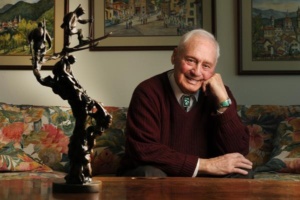 Hugh trained at Camp Hale after joining the WWII 10th Mountain Infantry Division and served in northern Italy and was awarded the Silver Star and Purple Heart. Hugh was instrumental in knitting together the WWII warriors with the 10th Mountain Division (LI). He was inducted into the Colorado Snowsports Hall of Fame and National Mining Hall of Fame. Hugh was a world-class mining engineer with openings in Australia and Russia, among many others. He was an avid downhill and hut-to-hut skier into his 90’s. See Hugh’s obituary. Bob was a Kansas native whose college career was interrupted by World War II, where he served in the 10th Mountain Division. His war years had a lasting impact on his life: He was gravely injured by machine-gun fire while fighting in Italy, hit in his back and right arm. His injuries nearly took his life both on the battlefield and again after he was sent home to the U.S. for treatment, when he had to fight a severe infection. Though he recovered beyond doctors’ expectations, his right arm and hand remained partially paralyzed. In his political career, Bob took to holding a pen in this hand to minimize its unusual appearance. The Army honored him with two Purple Hearts and a Bronze Star with a V for valor. Bob represented Kansas as a Republican in the U.S. Senate from 1969 to 1996. See Bob’s obituary. 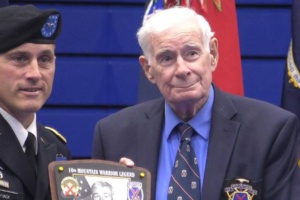 Mike served in the US Army for over 31 years in various Airborne and Light Infantry assignments throughout the United States and overseas where he received many awards and decorations. After his military service he was very involved in the Watertown and Fort Drum communities. In 1984, Mike advocated for Fort Drum as the home of the then newly-reactivated 10th Mountain Division. Plummer is also credited with starting an ‘Adopt-A-Platoon’ program in 1992, in which community members would write letters and send packages to deployed soldiers and have a pizza party when they returned. Mike was also instrumental in Foundation leadership for many years. Mike was a 30-year resident of Ft. Drum before moving to Alabama in 2021. See Mike’s obituary.

In their honor, sing, whistle or just listen and you will hear Hugh preparing to lead us in song one more time.

I was a barmaid in a mountain inn

There I learned the wages of miseries of sin.

Along came a skier fresh from off the slopes,

He’s the one that ruined me and shattered all my hopes.

Singin’ ninety pounds of rucksack, a pound of grub or two,

He’ll schuss the mountains like his daddy used to do.

He asked me for a candle to light his way to bed,

He asked me for a ‘kerchief’ to cover up his head.

I like a foolish maid thinking it no harm,

Jumped into the skier’s bed to keep the skier warm.

Early in the morning before the break of day,

He handed me a five note and with it he did say;

Take this my darling for the damage I have done.

Now if you have a daughter, bounce her on your knee.

And if you have a son, send the bastard out to ski.

The moral of the story, as you can plainly see,

Is – never trust a skier an inch above your knee.

For I trusted one and now look at me…

I’ve got a son in the Mountain Infantry.