A new four-part miniseries on the 10th Mountain Division in WWII is in development in Italy. Seen through the eyes of a group of soldiers from Company G of the 85th Regiment of the US 10th Mountain Division, the story begins with the Division’s arrival in Italy in January 1945 until the end of the war.

Based entirely on real events and documented through the memories of still living veterans, this miniseries narrates the important battles that led to the breaking of the German front in the central sector of the Gothic Line, in the upper Apennines between the provinces of Bologna, Modena, and Pistoia, signaling the end of the Second World War in Italy.

Dubbed in Italian and English, the series is structured around four episodes with a duration of approximately 25 minutes each. Each episode is developed around a specific incident of the events that unfolded in the Tuscan-Emilian Apennines between January and April 1945.=

The project follows Company G of the 85th Mountain Infantry Regiment since its arrival in Italy until the end of the war. The miniseries will be bookended by two documentaries:

The first documentary will narrate the formation of the 10th Mountain Division, the first and only unit of “Alpini” of the United States Army, up to its arrival in Italy, providing the viewer with a historical panorama regarding the Division since its creation, which took place between the end of 1941 and mid-1942 and its training, which lasted over two years. The documentary serves as a preparatory piece to the introduction to the miniseries.

The second documentary will pick up the Division’s story from the end of the war until its return to the United States.

Company G is remembered for being the unit of John D. Magrath, a young soldier of only 20 years who was killed in the attack on Hill 909. Magrath was the only soldier of the 10th Mountain Division to receive the Congressional Medal of Honor during World War II. The episode follows the company until the end of the war.

The objective is of a historical and cultural nature, is mainly aimed at passing the story on to young people of the new generations so that it remains alive, fixing in images the memory of the past through the personal memories of veterans.

The project is also a tribute to all those who fought and gave their lives for our freedom, especially the soldiers of the 10th Mountain Division during World War II.

The 10th Mountain Division Foundation is collecting U.S. donations to this project. If you would like to support the documentary, please donate on our website (note this is for the Italy miniseries project under “leave a comment”) or mail your donation payable to the 10th Mountain Division Foundation, 133 South Van Gordon Street, Suite 200, Lakewood, CO 80228.  Please note on your check that it’s for the Italy miniseries project. 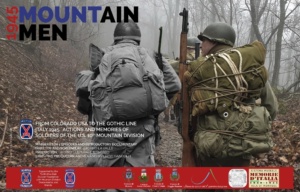