“It’s the stature of a designation of a national monument that will allow us to continue to build and have people embrace the story, and embrace this place,” said 10th Mountain Division Foundation president Nancy Kramer.

In another who’s who of Colorado’s big wigs, Gov. Jared Polis, Senators Michael Bennet and John Hickenlooper and Congressman Joe Neguse sat in a rainy tent near Leadville Tuesday afternoon alongside Agriculture Secretary Tom Vilsack, listening to people excited for their push to complete a mission long in the making. The idea is to get Camp Hale to be designated by the federal government as a Historic National Landscape. It’s been a push as a part of the CORE Act, which has failed in congress multiple times before.

Now they’re asking for President Biden to push this through using executive powers.

“We put together a plan that really not everybody got everything they wanted, and everybody gave a little,” Gary Burton, representing the decedents foundation of the 10 Mountain Division. “But the cooperation that we got out of that group and putting together a plan, then some disappointment, it didn’t go forward.  But here we are again, and it looks like we got traction again.”

The CORE act aims to protect 400,000 acres of public lands in Colorado.

That includes the Camp Hale site, littered with history as a training location for the 10th Mountain Division troops, training in the high alpine conditions for dangerous missions.

The pitch to Secretary Vilsack seemed to have gone over well.

“I take away a sense of urgency in this conversation needs to take place, in a sense, yesterday,” Vilsack said. “I’m going to go back and make sure that the president, the White House, is fully briefed on this. I’m going to make sure that our team is moving as expeditiously as they possibly can to do whatever we can and encourage the president to give us the authority to proceed.”

He went on to say he would be in favor of pushing President Biden to push the designation through.

“Well, this is a special place. There’s no question about it, and folks have made, I think in a very compelling case. The president is obviously going to have to make this decision but I’m going to take back the fact that this has been an extraordinary example of collaboration and partnership.”

Vilsack praised what he saw as a bipartisan effort from Coloradans to find a solution to protect Colorado’s gems for generations to come, and Senator Michael Bennet believes this to be a part of that triumph when asked about republican’s accusing the CORE act as a land grab.

“I don’t think that’s most, certainly not most Democrats and independents, and I don’t think it’s most Republicans either,” Bennet said.

Vilsack said he would work to speak with President Joe Biden as soon as he could. 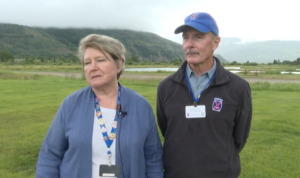