The 10th Mountain Divison Foundation 64th annual ceremony at Tennessee Pass, CO, will return to the glory of previous years as we gather to honor the fallen. The public is invited to attend. Because of limited seating, attendees are encouraged to bring lawn chairs.

Location: At the summit of Tennessee Pass on US Highway 24, between Leadville and Minturn, Colorado, at the 10th Mountain Division Monument (see map below) 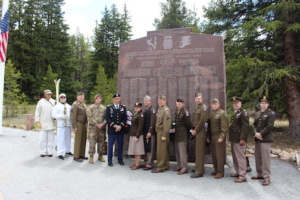 LEADVILLE, CO—Just half a mile from Ski Cooper, CO, veterans, local Coloradans, 10th Mountain Division Descendants and friends of the 10th Mountain Division will gather on Memorial Day, Monday, May 30, to honor the fallen comrades of the 10th Mountain Division and the 99th Battalion who lost their lives in combat. The WWII “men of the mountain” did their advanced ski training in the 1940s at Ski Cooper when it was known as Cooper Hill.
Open to the public, this Colorado Memorial Day tradition will remind participants of the sacrifice of our heroes and give them the opportunity to see and touch WWII artifacts and equipment provided by the 10th Mountain Division Foundation Living History Group. Soldiers from the 157th Colorado Army National Guard Battalion will participate in this year’s ceremony.
The program will include a keynote speaker, laying of wreaths and readings including Profiles of the Fallen. The Canon City Junior ROTC Color Guard will post colors. Music will be provided by the 4th Infantry Division Brass Quintet. Lunch will be available after the ceremony at Ski Cooper in Leadville.
“This is the 64th annual Memorial Day Ceremony honoring those who served in the 10th Mountain Division and all other veterans of America’s wars,” said Nancy Kramer, 10th Mountain Division Foundation president. “We gather at Tennessee Pass to remember those who gave the ultimate sacrifice while serving with the 10th Mountain Division.”
The WWII 10th Mountain Division was created in Colorado in 1943 and trained at Camp Hale, high in the Rockies, near Leadville. It was the only unit in the history of the United States Army organized specifically for mountain and winter warfare. The highly regarded 10th played a major role in the battles that brought about the surrender of the German Army in Italy in 1945.
After the war, the Division was deactivated and many of the Veterans went on to create ski resorts across America, including, among others, Vail, Aspen, and Arapahoe Basin in Colorado, Whiteface Mountain in New York State, Ski Santa Fe and Sandia Peak Ski areas in New Mexico, and numerous others. Veterans of the 10th were instrumental in making skiing a major American winter sport.
Reactivated in 1985 and based out of Fort Drum, New York, the 10th Mountain Division is the most deployed division in our Army. 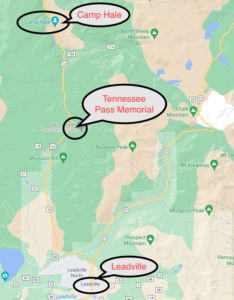